Posted by Rick Baines in How To Do It , Followed with 8 Comments.

For the past 7 years since it’s restoration, my Spitfire has had all four wheel arches Waxoyled to prevent rust. So far it’s done the job, but I wanted to try something different as I’m not a great fan of the Waxoyl finish.

Although Waxoyl is clear, dirt sticks to it and cannot be cleaned off (without removing the Waxoyl). Consequently, after many months of road use, the wheel arch looks like this: 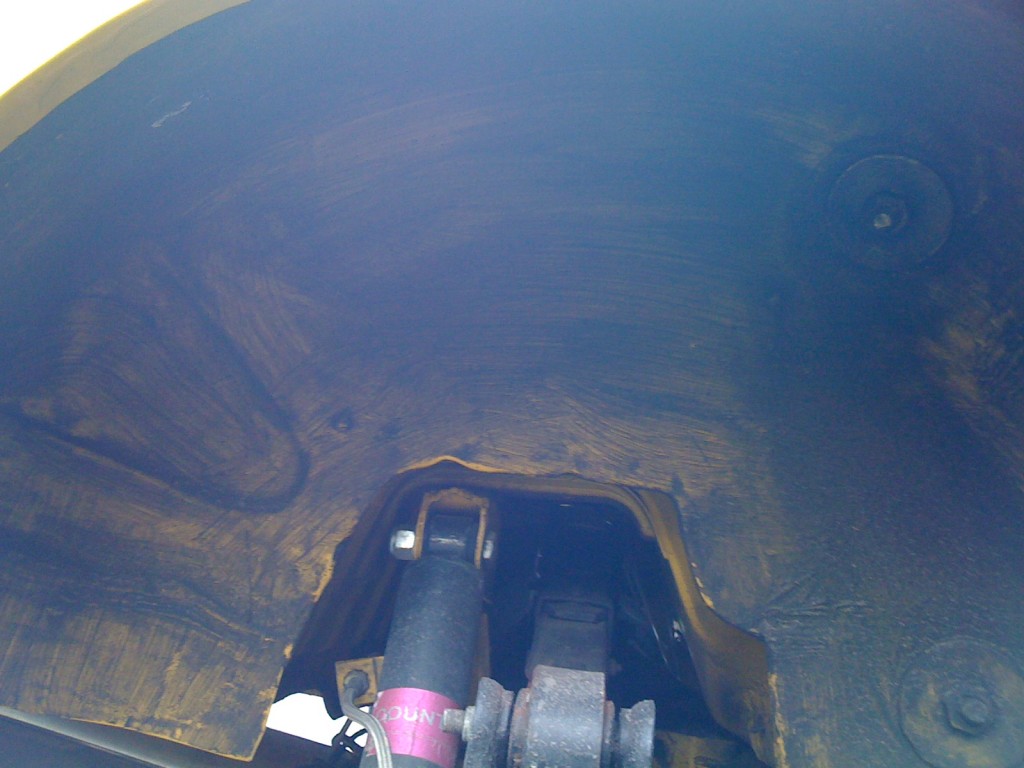 Not the prettiest of sights, and once it gets covered in dirt, the advantage of being able to see the condition underneath is removed. The eagle eyed amongst you will have already identified this as the right rear wheel arch, this article will be tackling the left rear only.

First job was removing the old Waxoyl – messy! To speed things up I filled an old spray bottle with white spirit – WD40 also works well for this. Spray it evenly all over the Waxoyl, then with some paper kitchen towels get it smeared all over so it sinks in. The old Waxoyl will come off with enough persistence, and pressure washing with water can help things along. Even though the old Waxoyl wasn’t airborne, I still covered the brake drum in an old carrier bag just in case.

On the final stretch of cleaning, use plenty of white spirit as this is effectively degreasing the wheel arch. Try remove the white spirit with a clean paper towel once you can’t see any more Waxoyl, and let it dry off thoroughly. You may need to touch up stonechips – I had a few, though fortunately these hadn’t even got surface rust as the Waxoyl had seeped over the chips to continue protecting the car. 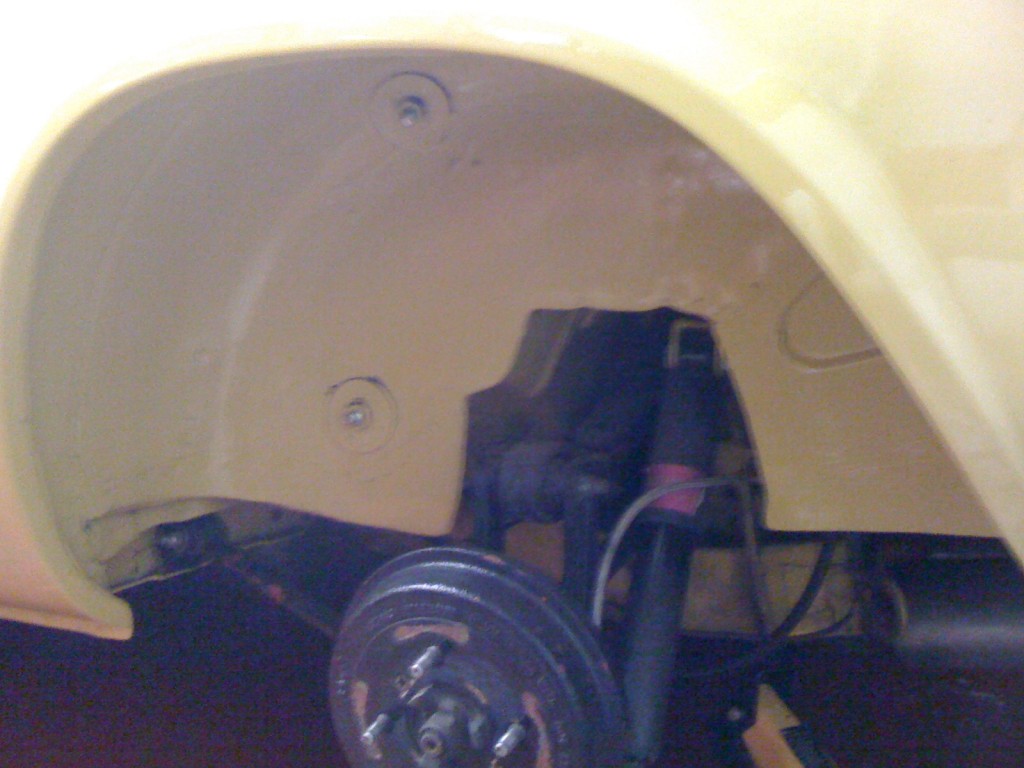 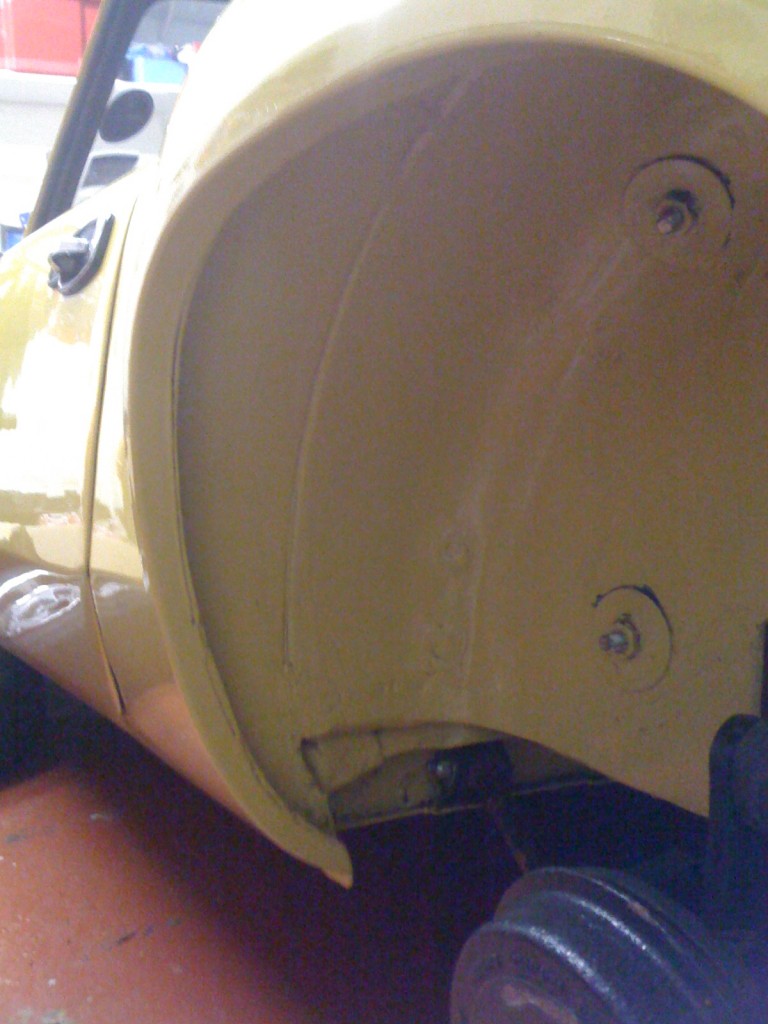 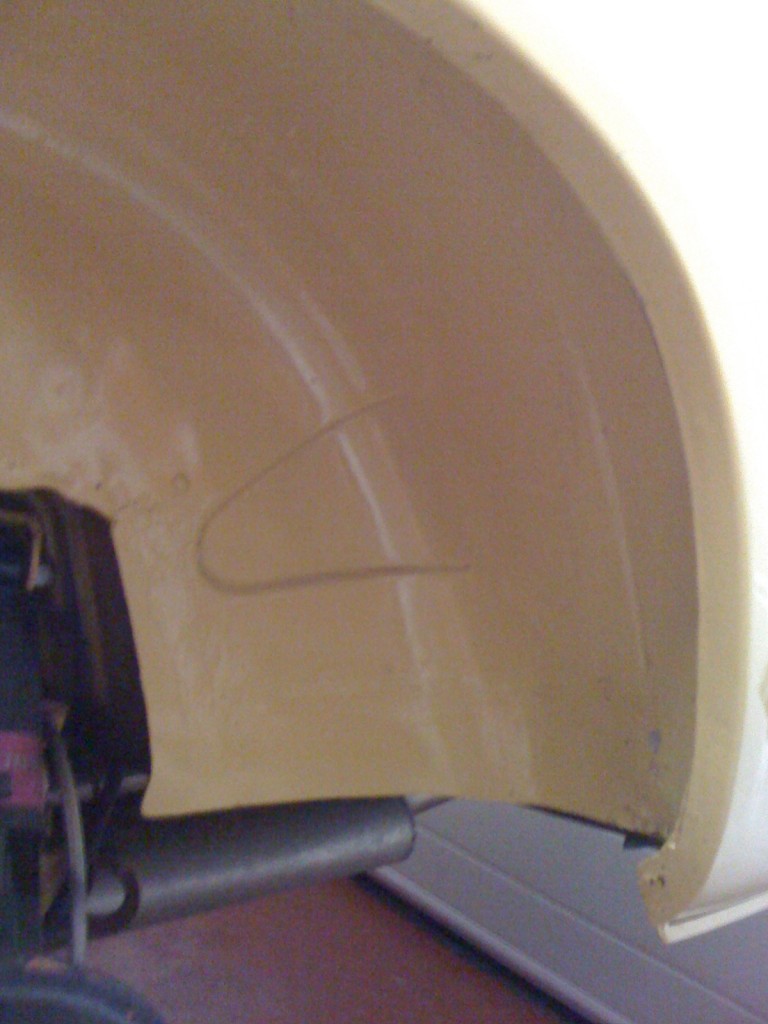 It was a particularly hot and humid day, and I also had the Dinitrol 3125 in a bucket of hot water. I think this was overkill, as if anything it flowed too well!  Because these photos were taken after spraying, you can’t see the sheets under the car to catch drips or the carrier bag I placed over the brakes. This was done for both types of Dinitrol, though the 4941 didn’t drip at all so the sheets weren’t as important.

The Dinitrol was applied using the free spray gun you get from rejel.com, using a compressor at 6 bar (about 87 psi). 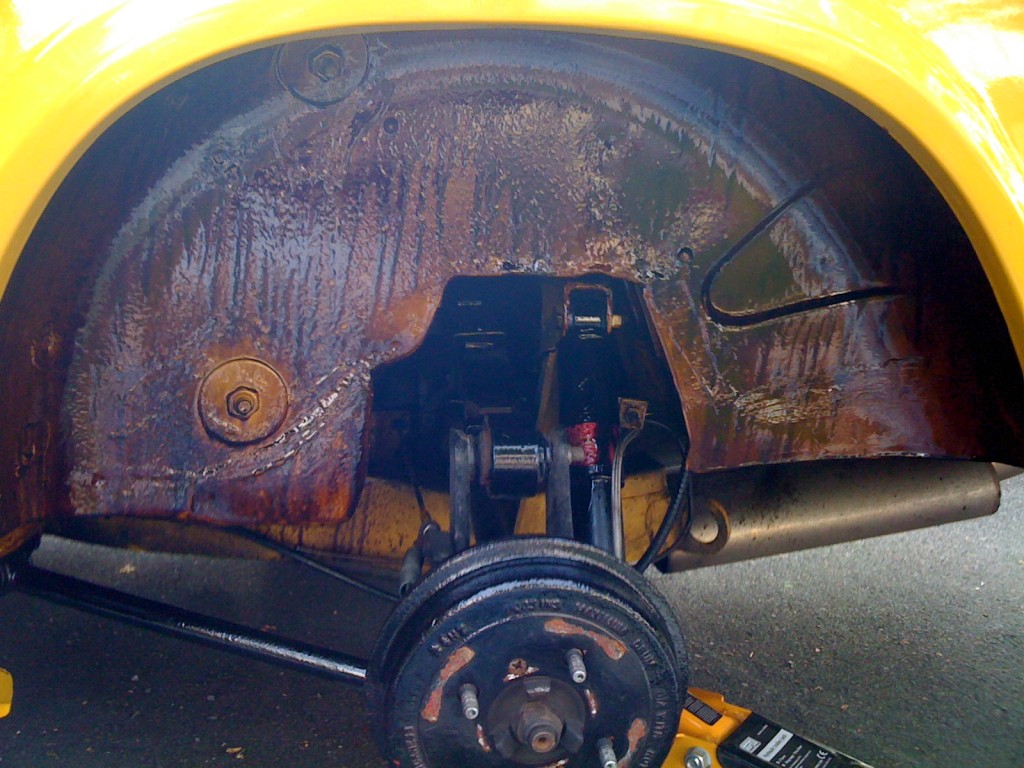 The 3125 is brown and very runny, you apply it first so it seeps into all these ridges. I also smeared a bit behind the inner arch at the lower edge (out of view here) with a latex gloved finger, just to make sure it covered well. 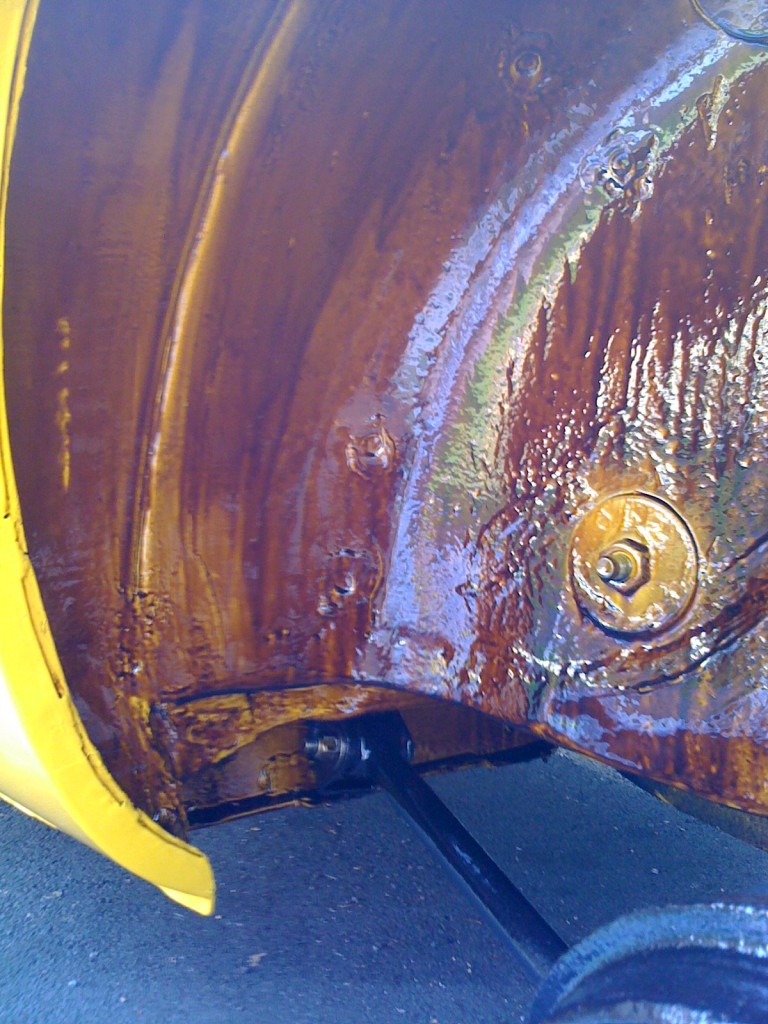 It really does seep into every seam! You want plenty on that flat ridge, many Spitfires have rotted here, and you can see repairs have been made here to mine during its body off restoration. 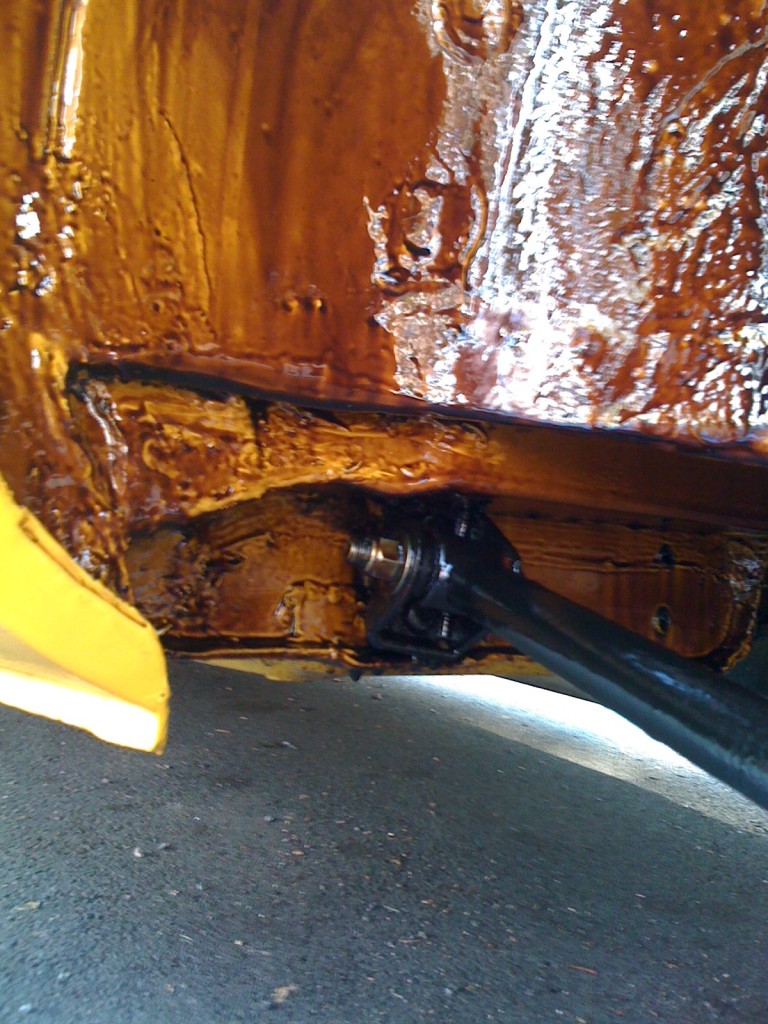 Make sure the wheel arch lip gets plenty, as this area is particularly difficult to clean and is a notable rust trap. 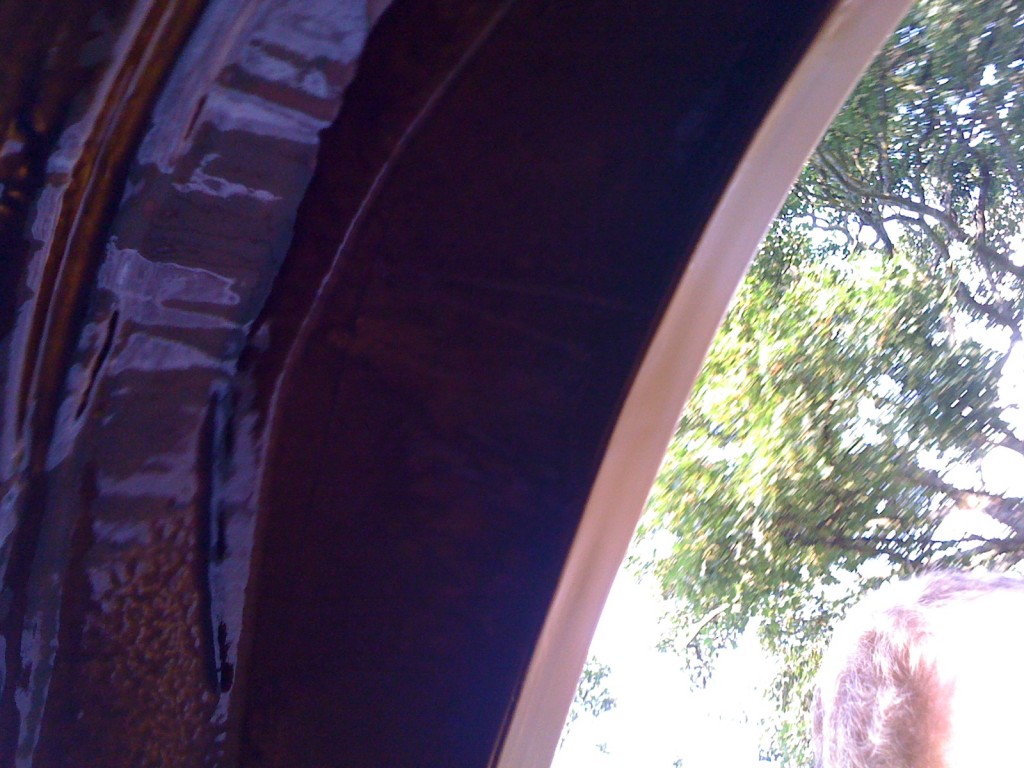 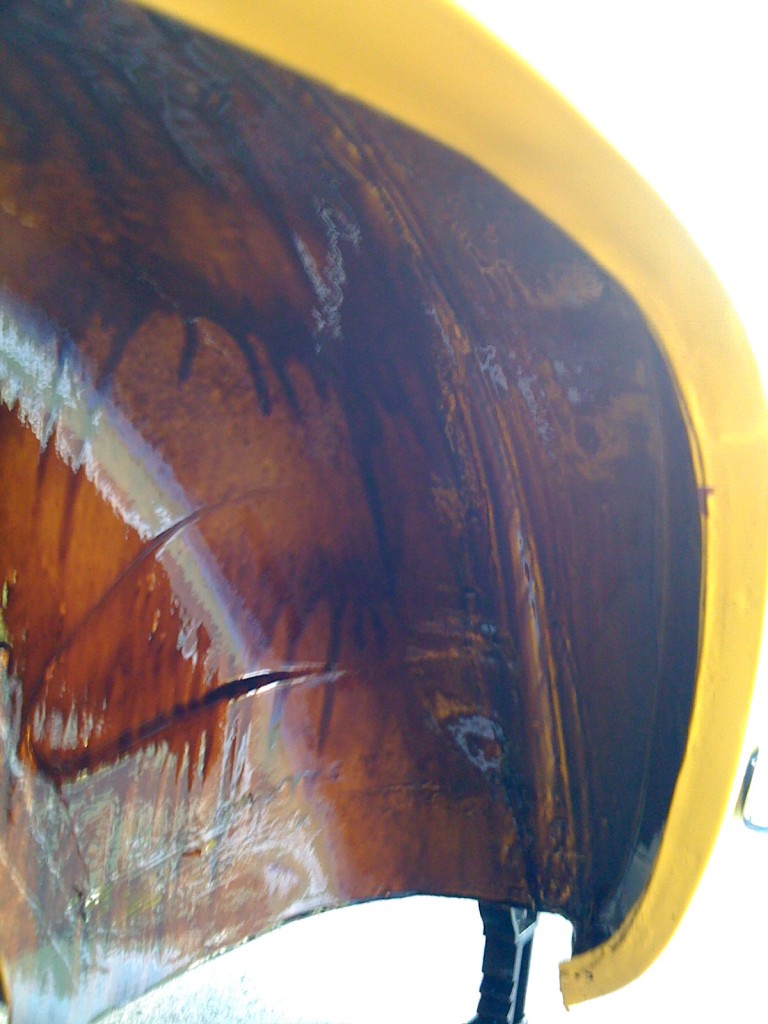 The photo below shows how the 3125 looked the next day after allowing it some time to dry. You probably wouldn’t have to wait this long, around 4-6 is probably sufficient but I had the time so didn’t mind. It was still slightly tacky at this stage, though I expect that would go even if you didn’t apply the black 4941 afterwards. 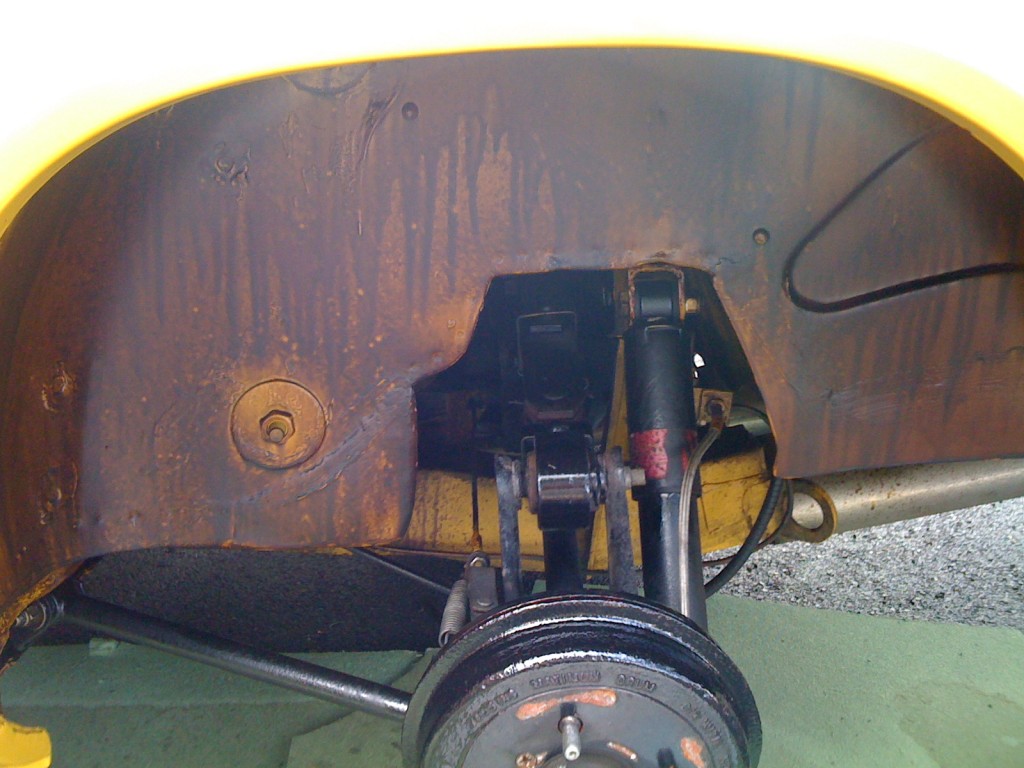 The final stage was applying the 4941. The way this went on was very different, it’s much more controllable and doesn’t really run at all. Because it is black, in dark places like wheel arches it can be easy to miss areas so an inspection lamp is handy. I had to touch a few bits up the next day that were a bit thinly applied, because looking at it later that evening with a lamp showed them up. 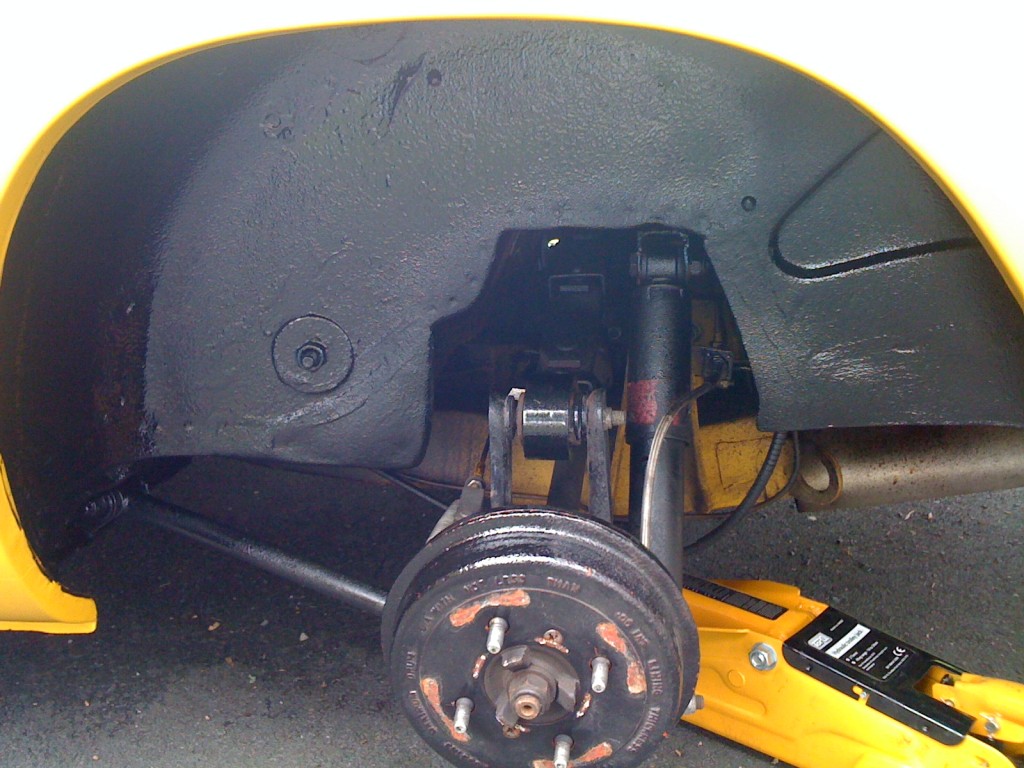 You really could do with masking up the outer body panels for this one, as it’s slightly harder to get off with white spirit than the 3125 – but it will come off.

In the ridge between the inner panels and the outer rear wing panel, you can see I’ve left a bit that should’ve been cleaned off, this was deliberate. I’m not fussed about having a bit of a black groove there if it means added protection, and you don’t notice it unless you’re looking closely. 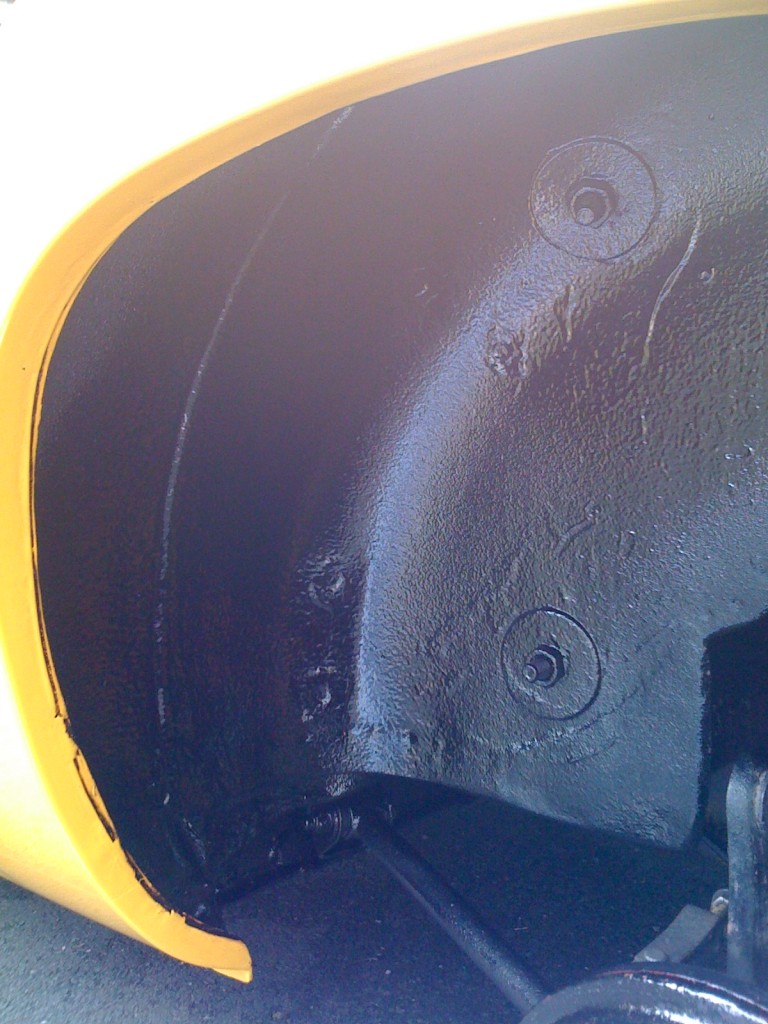 Notice how all the spot welds, repair patches and other marks on the bodywork still show through, even though the finish is slightly mottled. I really like this feature as it means you get a very OEM appearance. 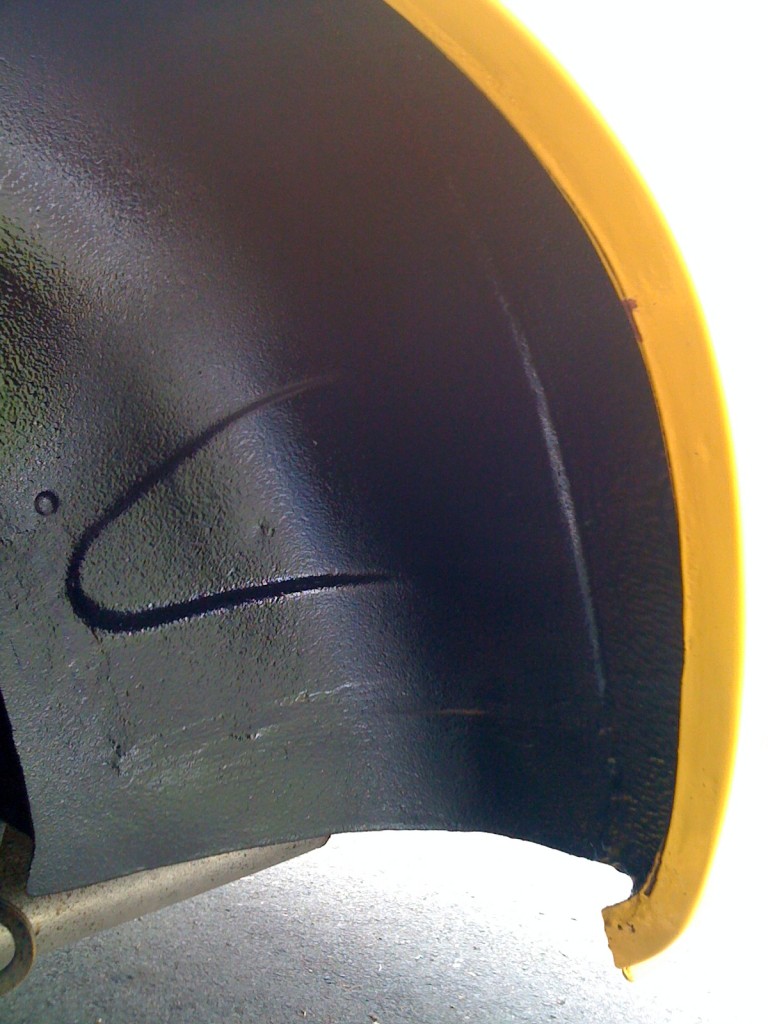 The finished wheel arch below. Once the car is driven for a bit, the rear leaf spring will settle down and the gap between the wheel and the top of the arch will be a lot smaller. 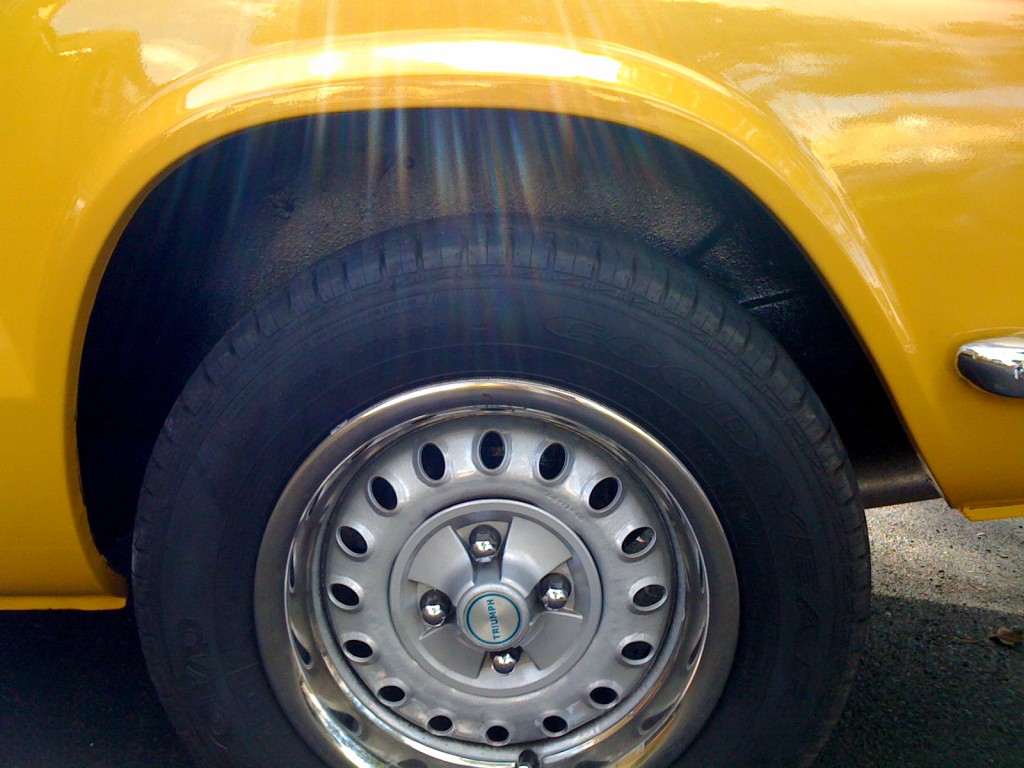 I’ve tested this since and any dirt does easily wash off, it’s a very impressive product. It was very very slightly tacky after drying, however it had a thorough 200 mile roadtest to Spurn Point involving heavy rain, muddy trails, sand, stones and some spirited driving and came back looking perfect, and that was just a day after I’d applied the last of the black 4941. It is no longer tacky at all and feels like a really strong finish. The real test will be on salty roads, but so far I have full confidence in it.