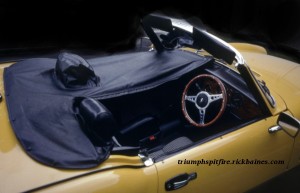 Here’s a little info on my current Spitfire. First registered on the 1st June 1978 (the day the world cup started), it was actually finished on the 4th January 1978 according to the BMIH archives. Production had started on the car the previous year, and by the 22nd December the bodyshell was finally completed. Trim prep commenced on the 29th, which shows just how quickly cars were being put together at Canley.

After being shipped to Henley’s, the car ended up at the Wandsworth dealership ‘Naylor & Root’. Originally an Austin/BMC dealer, by the late 70’s they’d branched into Triumph cars since BL dealers could sell all BL’s products at that time. Here’s what the place looked like in 1978: 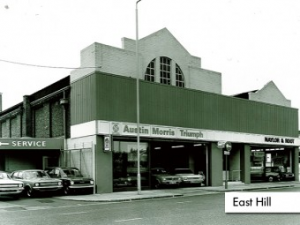 for all we know my car could’ve been in there that day.

Options on the car included:

It was bought by Londoner Paul Mcclintock, who sold the car 2 years later to Stephen Levinson. I managed to get in contact with Stephen who very kindly told me a bit about the car. Apparently Stephen bought the car to commute to a cricket club, and by the time he sold it the hood was leaking in several places! In 1987 he sold it to Hassop, a Toyota dealer who quickly shifted the car to the next owner.

After this the car gradually moved further north, changing hands many times. I’ve listed the owner’s names in the hope that they may find themselves on google and want to contact me about the car:

After that the car ended up at the Spitfire Graveyard. Fortunately this was before they were forced to break most of the cars coming through, and it managed to live to see another day. It was in quite a poor state though, and the chap who purchased it (a guy in Keighley called Mark) only held onto it for a week before selling to the last owner before me, Martin Appleby, so doesn’t appear on the V5.

Martin began a full body-off restoration about a year later, which included a total recondition of the engine (which is original to the car). Finishing in 2003, he racked up around 14,000 miles before I purchased the car and only taxed the car for the nicer 6 months of the year.

The first winter proved troublesome, and was a steep learning curve. For the first 2 months I didn’t even have a driving licence yet (passed in december), and mechanically the car was showing signs of lack of use. The battery wasn’t that old but was dying, the carbs needed serious tuning and a few months later the electronic ignition and distributor warranted replacing.

A big part of the problem was that the carburettors were using AAA needles, an extremely rich profile usually reserved for heavily modified engines. Since my car didn’t have any performance modifications, these had to go and once replaced with the correct ABT needles, the spark plugs and exhaust stopped sooting up. A total strip down and rebuild of the HS4’s shortly after this fixed the erratic idle, as new throttle spindles and discs were used in conjunction with careful cleaning and some metal polish. 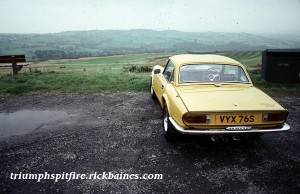 Over winter I also purchased a hardtop from a guy in Swadlincote. Nigel was restoring an Inca Yellow 1500 very similar to mine, although his was slightly older (a 1980 model). This was in good condition, but missing a couple of items. Rimmer Brothers provided the missing rear deck seal, and Mick Dolphin sourced the chrome tie-bars. The hard top is a bit of a pain to attach as it requires careful jacking of the car to widen the gap between the front and rear bolts, but it eventually fits on, and it’s worth it as the car is dead cozy inside.