Home » How To Do It » Central Locking on a Spitfire

10 JunCentral Locking on a Spitfire

Posted by Rick Baines in How To Do It , Followed with 2 Comments.

I hate having to lean over to unlock or lock the passenger door internally when I’m sat in the car, and since I was fitting a remote alarm/immobiliser that had a central lock facility, getting one of these cheap kits was a logical thing to do.

The unit hooks up to +12v with a fused wire, one ground connection, and two wires that connect to the central locking actuators on the alarm system. There’s a little black box that presumably has some sort of relays inside, and the wiring harness just plugs into it with a computer style connector. All this is straightforward and detailed in the instructions, but the part of the installation that’s specific to Spitfires is what I’ve taken photos of below. 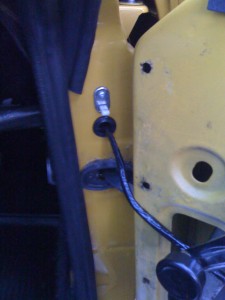 There was already one 1/2″ hole in the A-post made by the factory (for US cars), that was unused and had a blanking plug in. I just replaced this with a grommet and fed the wires through there. The passengers side had this but the drivers side didn’t, so I copied it by drilling a new 1/2″ hole in the drivers side A-post. If the central locking ever comes out, I’ll just put a blanking plug back in on both sides and it should look original.

Eventually I’ll probably drill a corresponding hole in the doors themselves to feed the wires through, but for now I’m content with them just slipped under the door card. 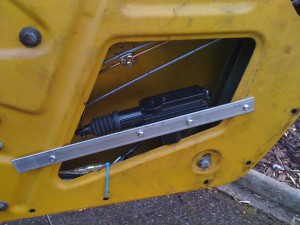 The lock rods travel diagonally across the inside of the door, but the actual locking mechanism works from side to side, not diagonally. Consequently I thought it would put the least amount of strain on the central locking units to aim them fairly horizontally in line with the actual sliding locks, not the rods. 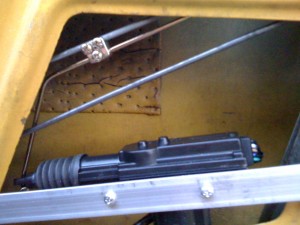 The bracket attaching the unit to the door in these pics is a small strip of aluminium I had to buy, as I accidentally used up both brackets on the first door I did (unpictured) – I thought I had 4 brackets but the kit only came with 2 – doh! You want to align the motor so it doesn’t foul the window winder mechanism. This is next to impossible, and mine still rub slightly when the window goes up and down but its almost out of the way. You could probably bend the motor unit out a little more, its surprising how it doesn’t seem to bulge out of the door card trim.