Posted by Rick Baines in Interesting Facts , Followed with 10 Comments. 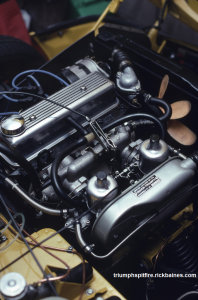 Here’s an article by Deborah Evans that was originally written for the MGOC (later MG Midgets used the Triumph engine) and reposted on the pistonheads forum:

In 1968 Triumph became part of BLMC who were intent on cost saving such that in 1970 a major revision was made to the engine with the release of the Spitfire MkIV. It is this revision that would become the Achilles Heel of the later engines. The change centred primarily around the crankshaft. In order to rationalise machining operations the journal diameters were increased to the same size as those on the 6-cylinder engine (as fitted to the Vitesse, GT6 and TR5/6). Journal diameters increased from 2.0005” – 2.0010” to 2.3115” – 2.2120” (main bearing journals) and from 1.625” – 1.6255” to 1.875” – 1.8755” (crankpin journals). In doing so this made the crankshaft heavier with larger diameter but narrower bearings. Thus the later 1296cc crankshafts have more bearing drag than the early ‘small bearing’ cranks and, with the increased weight, take more power to accelerate.

Unfortunately BLMC compounded this by downgrading the steel used for the crank from EN40B to the far inferior EN16U. Given that the engine is a 3-main bearing design, the use of a heavier crank in an inferior material means that crankshaft flex starts to become a problem, hence the late 1296cc and all 1493cc engines are referred to as ‘floppy crank motors’. At some stage in the design of the engine (from 1296cc engine number FH25001E and all 1493cc engines) the bores were also recessed which was said to improve the sealing of the cylinder head gasket (even though earlier units had not had a problem). This would limit the safe over boring of the engine to a mere 20thou and, in fact can cause problems with detonation in tuned motors. If overboring greater than 20thou I deck the block flat and use the earlier 1296cc head gasket. Doing this will also mean that the pistons will need to be decked so as to give 20 – 25 thou clearance beneath the head gasket.

In 1972 the engine was again increased in size by stroking it to 87.5mm giving 1493cc. By this stage the engine really was at the limit of what could be done to it and the fact that it had a ‘floppy’ crank coupled with such a long stroke meant that failures would be commonplace unless certain aspects of the design are addressed. Fundamentally, for the reasons discussed earlier, crankshaft flex on the 1493cc motor is a major concern since it can rapidly lead to the oil overheating causing oil film breakdown with concomitant damage. Given that the motor is a 3-main bearing design, aside from the stroked crankshaft being poorly supported, it is the centre main bearing that feeds numbers 2 and 3 big ends. Any form of oil film breakdown will rapidly lead to wear of these bearings and, if not caught soon enough, a connecting rod (usually number 3) making a bid for freedom at high speed through the side of the crankcase. This is one of the reasons why the 1493cc unit cannot be revved like its smaller brethren.

However these failings can be addressed so as to produce a reliable unit with longevity between rebuilds. Primarily it is the oil system that should be sorted out, since this is at the heart of the problems. Fundamentally it is high oil temperature leading to oil film breakdown that kills Triumph 1500 engines. For this reason it is essential that an oil cooler be fitted; a 13 row by 235mm cooler is perfectly adequate (although for ‘hard’ use a 16 row is better).

In terms of the oil being used you must use a good 20/50 and change it yearly or every 6000 miles (whichever comes first), my personal choice is for Valvoline VR1 20/50 Racing. If the engine is in any state of tune (Stage one upwards) then use a 20/60 such as Penrite HPR 30.

Having sorted the oil and oil cooling, then modifications can be made to the oil system to increase its efficiency. Firstly it is essential to use the later type oil pump. This has an angled pick up that sits lower in the sump and better resists oil surge (if surge becomes a problem such as on Track Days then a single longitudinal baffle can be brazed into the sump, or better still a ‘Windage Tray’). Additionally care should be taken to reduce the endfloat on the pump to the minimum quoted figures:

Given that the centre main bearing feeds numbers 2 and 3 big ends, then an increase in flow to here is beneficial. The gallery can be opened out to 5/16” (7.9mm), to do this requires the removal of the distributor driveshaft bush and care should be taken upon reassembly to attain the correct distributor endfloat.

While the crankshaft is not particularly well supported, the use of main cap straps or even steel main caps is not required on a road going motor. What should be done however, is to bottom tap the main bolt holes and fit longer high tensile bolts (3.25” UHL), my preference being for socket headed bolts (with case hardened washers) which can be wire locked in place (in addition to using loctite). At the same time as addressing the mains, the big ends should be fitted with high tensile bolts (the originals should never be re-used). Given the amount of ‘monkey metal’ fasteners being supplied these days, I suggest you use ARP bolts (which are stronger than the con rods) – a bit of a ‘no brainer’ really. Alternatively Ford Sierra Cosworth big end bolts can be used since they are a straight swap. Similarly I use ARP head studs and flywheel bolts.

The crankshaft / flywheel / front pulley / clutch MUST be accurately balanced to help cut down on vibrations inducing crank flex and a lightened flywheel is also of help here. Additionally I lighten the rods by polishing them down the beam (as well as removing the ‘cup’ at the little end). I then balance them end-to-end and overall to within 0.1g. If you are worried about con rod strength and unwilling to shell out ££££ on H-Section forged rods then use the early TR5 rods since they are basically the same albeit stronger and lack the hole in the shank above the big end.

With respect to bearings, ideally a lead-indium type should be used since these will better resist the loads encountered than will reticular tin ones. Unfortunately Vandervell VP2 are no longer available for this engine. This leads us to some choices:

For ‘hard’ use it is possible to fit MGB big end bearings (original part no. AEB4512) at 0.010” undersize (for a standard crank). The crankshaft should be ground to 1.8665” – 1.867 (ie 8.5 thou). The outsize edge of the locating tang on the bearings needs to be filed down slightly to locate them correctly in the con rods. Additionally, since these bearings are wider than the originals, the fillet radius of the journals must be checked after grinding and modified as necessary.

Having done this, while Tri-Metal VP2 bearings are unavailable, the alternatives are:

AE GS2541LC, which is a Tri-Metal, sintered lead-copper bearing. This is essentially the same bearing as the Glacier Vandervell VPR91173LC but which uses a lead/tin/copper overlay as opposed to the lead indium in the old VP2 compound.
This is a high quality bearing piece able to withstand moderate to high loads

A better alternative is the Clevite 77 compound (part no. CB792P), which is made in the USA. This is another Tri-Metal design using a lead/tin/copper overlay, the difference being that it uses a cast copper/lead material (similar to the old VP2) and, hence, is about 20% – 30% tougher in its ability to withstand loads than is the GS2541LC.

A final alternative is to use ACL Duraglide 780 Tri-Metal heavy duty bearings. These are essentially similar to the Clevite design.

If you don’t wish to go to the effort of fitting MGB bearings, and for a car that will see only normal / occasional track day use the expense is probably not worthwhile, then Tri-Metal bearings to fit the big ends are available from King (part no. CR4403AM).

With regards to the main bearings having a VP2 like compound isn’t as critical however I still believe the best bearings available should be fitted. To this end I would suggest using King part no. MB341AM.

Another worthwhile modification is to source an earlier style ‘small bearing’ camshaft and insert cam bearings into the block since in the 1493cc motor the cam runs direct in the block with no bearings.

With regard to the oil feed to the rocker shaft assembly, then there are a number of companies that will sell you an external rocker feed kit. Unfortunately all these kits are fundamentally flawed as they come and lack adequate instructions as to their fitting.

EVERY kit I have seen uses a –3 hose with a banjo fitting to go into the oil gallery plug at the back of the head and a 1/8 NPTF fitting to screw into the main oil gallery beneath the distributor. A moment’s thought, given what I have said about oil feed to the centre main bearing, will show up just why this is a bad idea. By connecting the rocker feed in this way you will inevitably rob oil from the centre main, hence you will actually make your motor more likely to go pop! Additionally, with no restrictor, you will over-feed oil to the rockers causing problems with inlet valve stem oiling at low rpm (meaning your motor will both burn oil and be closer to causing detonation from the reduction in octane of the fuel/air charge!). Finally, merely fitting an external oil feed while the internal oilway to the cylinder head is active will cause cavitation in the oil galleries and all sorts of flow problems. By far the best way to fit an external rocker feed is to firstly block off the vertical oilways in the block and head (use a tap and an 8mm grub screw in both block and head) and to take the feed from the main gallery at the rear of the block (opposite number 3 main) via the 5/16” UNF oilway plug tapping. To do this you will need a –2 to –3 male-male adapter to screw into the side of the block.

Another problem often reported with the Triumph 4-pot is the tendency for the thrust washers to drop out on high mileage engines. This will rapidly result in wear to the sides of number 3 main bearing cap and a block and crank that are scrap. While you could silver pin the thrusts in place, this is really only of use on a race engine that undergoes routine teardowns and rebuilds since wear of the thrusts will mean the heads of the silver pins becoming proud and damaging the crank. For a road / occasional Track Day motor I wouldn’t bother, just check the thrusts every 40,000 miles or so.